During 2006, the hourly earnings (including overtime and shift pay) of full-time employees in London were higher than any other UK region at £14.88, an increase of 2.5 per cent on the previous year. Earnings in the South East were next highest at £11.82 per hour. This compares to an average of £11.21 per hour for the UK as a whole. The lowest earnings during 2006 were in Northern Ireland, Wales and the North East at around £10 per hour. The highest earnings growth 2005 to 2006 was in Scotland at over 5.2 per cent compared to the UK average of 4.1 per cent.

The gender pay gap, in terms of the ratio between female and male hourly earnings, has been decreasing in all regions. In 2006, average female hourly earnings were 97.4 per cent of male earnings in Northern Ireland, compared with less than 90 per cent for each other region, and 86.7 per cent for the UK as a whole. Northern Ireland also saw the largest decrease in the gender gap between 1998 and 2006.

However, comparisons of the value of hourly earnings between regions as well as over time should be interpreted with caution. These estimates do not take account of regional variations in the cost of living and, to that extent, do not represent the true ‘buying power’ of these earnings.

Table 6(c) and Chart 6(c) cover total number of employee jobs in the UK and each region’s share of this total. London had the largest share at around 15 per cent of all UK employee jobs. The level of employee jobs grew most quickly in Wales, with an increase of 12 per cent between December 2001 and December 2006. The North East and Northern Ireland showed the next largest rise, with 8.1 and 7.5 per cent respectively.

High levels of commuting should be taken into consideration when looking at London’s share of the UK labour market. The LFS indicates that in autumn 2003 approximately 20 per cent of employees in London commuted in from another region. 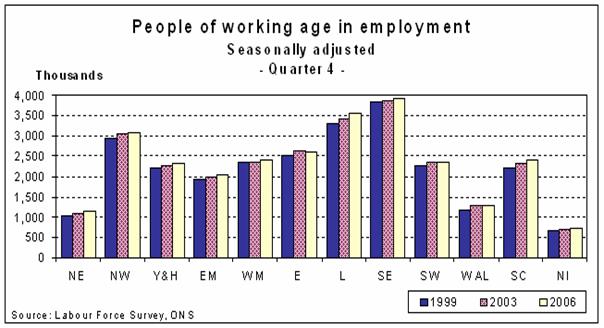 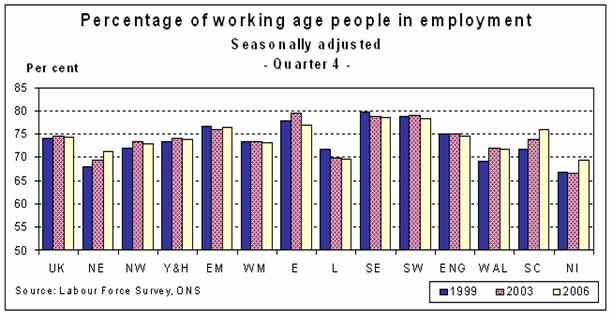 UK unemployment is measured by the Labour Force Survey (LFS). Chart 7(a) shows the seasonally adjusted unemployment rate between 1999 and 2006 (quarter 4).

During quarter 4 2006, the unemployment rate was lowest in the South West at 3.8 per cent, as compared to a rate for the UK at 5.5 per cent. During this time, London had the highest rate of unemployment of any UK region at 7.9 per cent. 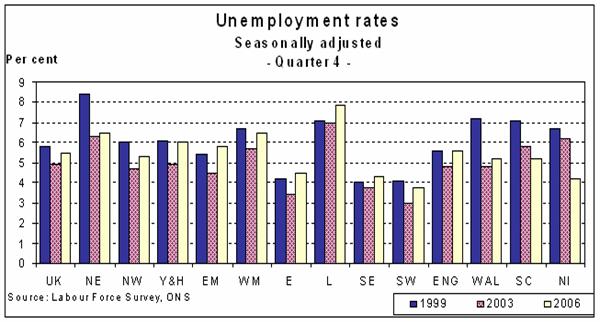 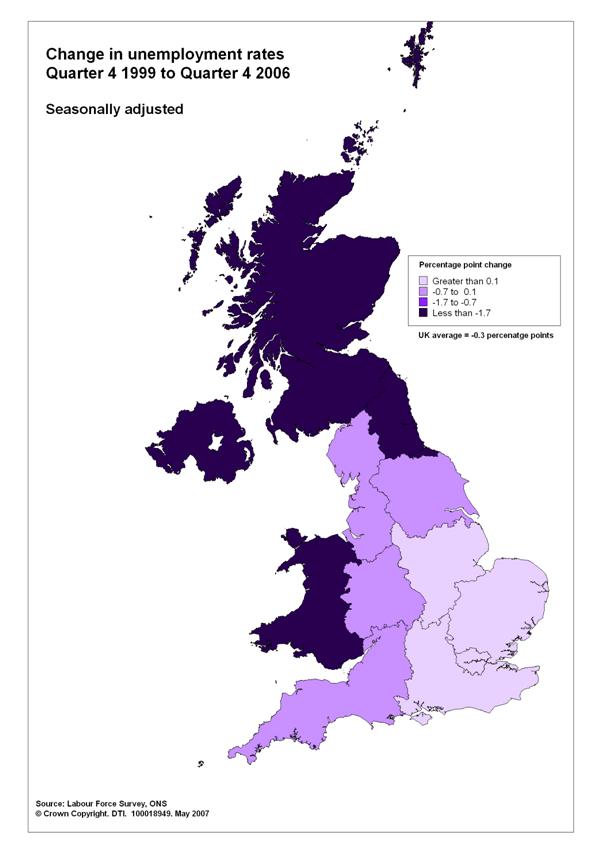 The claimant count is the number of people claiming unemployment related benefits, such as Job Seeker’s Allowance, taken from monthly records. Table 8(a) gives the claimant count rate as a proportion of workforce jobs (plus claimants) in the region.

Claimant count rates during December 2006 were highest in the North East with a rate of 4.4 per cent, and lowest in the South East and the South West, at 1.8 per cent for both regions. All regions show a decrease in the proportion of claimants in the workforce between December 1999 and December 2006, with the largest drop of 2.5 percentage points in Northern Ireland.

Table and Chart 8(b) detail the percentage of all claimants in receipt of the Job Seeker’s Allowance benefit for a year or more (computerised claims only; approximately 1 per cent of claims are dealt with manually, and these are excluded from the figures). Over the UK as a whole, this proportion has fallen from 24.1 per cent of all claimants in December 1999 to just over 17.1 per cent in December 2006. Northern Ireland had the largest decrease during this period by over 14 percentage points. The highest percentage of long-term claimants during December 2006 was also in Northern Ireland, where 21.6 per cent of benefit recipients had been claiming for a year or more.

The indicators included within this section relate to the Department for Education and Skills’ (DfES) PSA and Learning and Skills Council (LSC) targets for England, although data are also provided for Wales, Scotland and Northern Ireland. For further information on the targets refer to the link provided here to the DfES website: http://www.dfes.gov.uk/publications/5yearstrategyprogress/docs/5yearstrategy-maintexcell.pdf

The reader should note that due to methodological changes the statistics contained in the table and charts for the 9(a) series have recently been changed. Data between 1999 and 2005 were based on samples taken from the Labour Force Survey (LFS). This has subsequently been replaced by estimates derived from administrative sources (2006 data) because the sample size for these age groups in the LFS was very small, however information derived from the new methodology is only available for the nine English regions. Refer to Definitions for further information.

Table and chart 9(a)(i) detail the percentage of 16-19 year olds qualified to the equivalent of NVQ level 2 (e.g. 5 GCSE passes at grade A*-C) or above. By 2006 across the English regions as a whole, the South East had the highest proportion of 16-19 year olds qualified to NVQ level 2 or above at 70.2 per cent and Yorkshire and the Humber had the lowest proportion at 61.9 per cent.

Tables and Charts 9(a)(ii) and 9(a)(iii) show the proportions of young adults (19-21 year olds) educated to NVQ level 2 or higher and educated to NVQ level 3 (equivalent to 2 A level passes at grade A-C) or higher. In 2006 the proportion at level 2 or above was also lowest in Yorkshire and the Humber with 68.4 per cent and the lowest proportion at level 3 or above was the North East at 40.9 per cent.

The 1999 to 2005 data derived from LFS are still presented here but it is hard to assess whether changes between these years and 2006 are real or represent differential effects at regional level of the change of methodology.

No methodological changes were necessary for economically active adults as a whole because the LFS samples are sufficiently large. Tables and Charts 9(b)(i) to 9(b)(iii) display the proportions of economically active adults qualified to at least NVQ level 4 (equivalent to degree level), level 3 and level 2 respectively. Note that in 2006 data for the LFS reverted from seasonal to calendar quarters and therefore the later are now provided in this publication, with a back series to 1997. Across the UK, in quarter 4 2006, almost 33 per cent of economically active adults were qualified to NVQ level 4 or above. However, the achievement profile across regions is uneven; London and Scotland perform especially well (43.5 and 37.1 per cent respectively) but Yorkshire and the Humber relatively poorly (27.5 per cent).
Achievement at NVQ level 3 displays a similar pattern. Over half (52.8 per cent) of economically active adults in the UK have level 3 or above, with the highest proportion in Scotland (58.4 per cent) and the lowest in the East of England (47.8 per cent). Table 9(b)(iii) shows Scotland having the highest proportion of adults qualified to NVQ level 2 or above (77.8 per cent) and East of England as having the lowest (70.9 per cent).

These estimates should be interpreted with care. In particular, the results for London and the South East say as much about the economic ‘pull’ of these regions and the mobility of people with certain qualifications, as they do about the social and demographic characteristics of other regions.

Roughly 1 in 6 employees in the UK received job related training in the previous 4 weeks (15.9 per cent) as shown in Table and Chart 9(c). This pattern is broadly repeated across all regions, except for Northern Ireland, where only 1 in 10 received training (8.9 per cent).